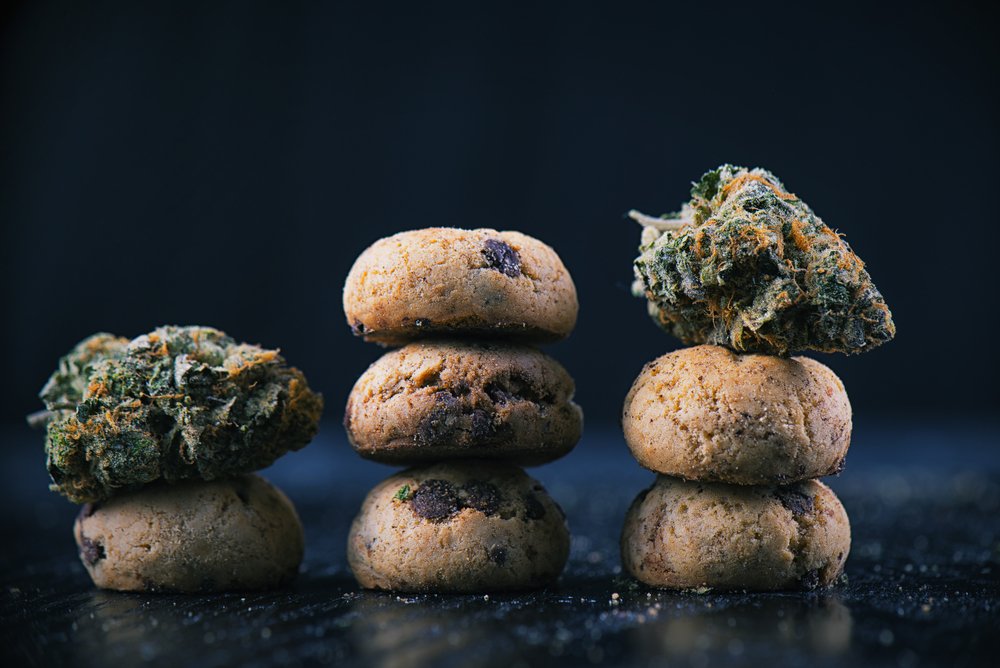 CBD Edibles: Are There Health Benefits In Eating Cannabis?

Cannabis is the word on everybody’s lips and the interest in the world’s most famous green plant continues to grow. The UN currently classifies the plant as a Schedule I drug. This means that it’s a substance that is prone to addiction with zero medical use. In fact, the classification placed cannabis in the same group as heroin as “one of the most dangerous and regarded as exceptionally addictive and producing severe ill effects”. That said, the World Health Organization (WHO) recently proposed recommendations to the UN’s drug status. This may have something to do with the cannabinoid known as CBD as they also ask for the substance to not be restricted.

Last year, the 2018 Farm Bill Trusted Source passed by Congress removed hemp containing only trace amounts of THC (tetrahydrocannabinol), the psychoactive ingredient in cannabis, from the Controlled Substances Act. This then opened the floodgates and a number of products containing CBD extracts from hemp have sprung up all over the United States. With medical marijuana being legal in 34 states, the inclusion of mainstream medical marijuana has given rise to consumable medical-marijuana-based food and beverages.

Why the CBD obsession?

Cannabis contains chemicals called cannabinoids and the world is particularly obsessed with two of them; tetrahydrocannabinol (THC) and cannabidiol (CBD). THC is responsible for the psychedelic effects of marijuana. However, CBD doesn’t get you high. Rather, this substance is at the core of many of the health benefits associated with marijuana.

According to various studies, CBD has been linked to anxiety relief and anti-seizure, helping people with neurodegenerative disorders, relief from chronic pain, and anti–acne treatment. In addition to this, there is also growing dissatisfaction amongst consumers with pharmaceutical companies, especially in regards to the opioid crisis,  and many are looking for safer and more natural alternatives. Analysts estimate that the CBD industry, which currently generates revenue of between $600 million and $2 billion, will balloon to $22 billion in the next three years. In addition to lotions, oils, and supplements, consumable cannabis-based products have made their way into the mainstream. As a result, consumers are looking for ways in which they can safely infuse their dishes with the controversial plant.

With big brands such as Coca Cola eyeing the edible-cannabis business, it’s possible that edibles may be at the head of the cannabis takeover.

Edibles refer to foods or drinks that contain cannabis. Consumers who use cannabis for recreational purposes make their own edibles by infusing butter or oil with cannabis and mixing it into their recipes. In exposing raw cannabis to heat, the compounds found in raw marijuana (tetrahydrocannabinol acid (THCA) and cannabidiolic acid (CBDA)) soon turn into active forms of THC and CBD (1).

What are the official regulations on edibles?

In short, they’re illegal. Unfortunately, the subject of cannabis is still clouded by a lot of gray areas. So, it’s important to eloquently point out two important facts.

Fact 1: In terms of medical marijuana, the U.S. Food and Drug Administration has signed off on a few cannabis-based drugs at the moment. Patients battling nausea caused by chemotherapy are encouraged to use synthetic cannabinoids, either dronabinol or nabilone. There is also Epidolex – a treatment used to treat severe and rare forms of epilepsy – Lennox-Gastaut syndrome and Dravet syndrome.

Fact 2: The FDA prohibits the addition of CBD to prepared foods. Why? Because, per the drug exclusion rule,  any active substance in a pharmaceutical cannot be added to food. Basically, you can’t add a drug to food.

“Additionally, it’s unlawful under the FD&C Act to introduce food containing added CBD or THC into interstate commerce, or to market CBD or THC products as, or in, dietary supplements, regardless of whether the substances are hemp-derived… Under the FD&C Act, it’s illegal to introduce drug ingredients like these substances into the food supply, or to market them as dietary supplements. This is a requirement that we apply across the board to food products that contain substances that are active ingredients in any drug.” – FDA

How are states regulating edibles?

Amidst FDA regulations (they’ve opened a docket for the public to submit comments through to July 16), each state is adopting its own policies in dealing with consumable CBD products.

This past May, Oklahoma Gov. Kevin Stitt approved a bill to establish labeling requirements for CBD and hemp extracts, whereas Indiana, Utah, Texas, and Florida are calling for businesses to provide QR code that allows consumers to look up batch numbers, potency and other ingredients. Nonetheless, not every other state is as welcoming in their attitude towards CBD edibles. In February, the North Carolina Department of Agriculture and Consumer Services issued letters to manufacturers and retailers warning them about the sale and distribution of CBD edibles. New York City’s Department of Health and Mental Hygiene soon followed suit. They warned food service establishments and retailers not to add CBD to any food or drink. Also, starting October 1, the department will issue violations and perhaps fines. Lastly, the Los Angeles County Department of Public Health announced that starting this month, putting CBD in food products will cost businesses points on their health inspections.

At this rate, the only place around the United States where you can legally eat edibles is in Canada as edibles are set to be legal in December.

There is growing frustration with the FDA

While cannabis has been around for a thousand years, the industry and regulations surrounding it are still in their infancy. The FDA is lacking in both guidelines and research when it comes to CBD. This then has allowed a number of consumers and retailers to run rampant.

Businesses and restaurants are simply responding to consumer demand by selling CBD-infused products. Hopefully, this new business model will force the FDA to come up with a federal regulatory framework.

Edibles don’t have any labeling or dosage guidelines. Thus, consumers have no knowledge of how much CBD they’re ingesting. This then raises concerns about whether consumers are getting a good dose of CBD, or a hefty dose of THC.

Is it dangerous to eat edibles?

According to a study published in the journal Annals of Internal Medicine, an emergency room in Denver, Colorado saw a threefold increase in the number of patients between 2012 and 2016.

Of the emergency room visits, there were 9,973 cannabis-related ones. Of that number, 2,567 were determined to be at least partially attributable to cannabis. Additionally, 238 of those had consumed edibles. Researchers found that patients who had eaten edibles were more likely to suffer from psychiatric symptoms (with no history of psychiatric illness), intoxication, or cardiovascular issues.

In regards to this, the lead author of the study, Dr. Andrew Monte, noted that the only cannabis-deaths in Colorado involved edibles. The deaths were as a result of a murder-suicide in 2014 and a suicide in 2015. In all three incidents, users reportedly exhibited extremely erratic behavior after consuming the edibles.

Additionally, in a separate study, the Canadian Journal of Cardiology published a case report on a 70-year-old man who had a heart attack after ingesting a cannabis lollipop. It appears that cannabis affects cardiovascular health by increasing heart rate and blood pressure.

For patients who have smoked cannabis, it mostly dealt with gastrointestinal complaints.

Why the difference in symptoms?

“When you’re smoking marijuana, you start seeing the effects in a couple of minutes,” said Dr. Nora D. Volkow, director of the National Institute on Drug Abuse of the National Institutes of Health, who partook in the study, “But when you take it orally, it takes a long time to feel the effects, and if you’re taking it in order to feel good and you feel nothing, you may think you didn’t take enough. This is a common phenomenon. People take another dose.”

As a result, people soon find themselves overdosing on edibles and this may lead to a psychotic episode. Dr. Volkow also noted the following; “the content in your blood is going to be much, much higher when you take it with chocolate or a brownie rather than a gummy bear.”

What does this study mean for the future of edibles?

The different ways in which cannabis is consumed may lead to adverse health outcomes. That said, Dr. Monte does wish to emphasize that the study is still an observational, small-scale one.

“We see approximately 300 cases per day in our emergency department. Really, only one of those will be what we consider a ‘cannabist-attributable’ visit. So, this is a really small percentage of the people we are seeing. Many people use cannabis safely without any adverse drug events,”

It’s clear that both retailers and consumers still need more education when it comes to edibles. However, this may be difficult without an FDA framework to work with.

As mentioned, medical marijuana is legal in 33 states thus you may be able to get a prescription for edibles from a healthcare provider.

However, if you’re looking to use edibles for recreational purposes, you may have to do your own research. Well,  at least not until the FDA comes through with its own regulations. It’s important to do thorough research into any product you come into contact with. Many businesses are guilty of mislabeling. Some may claim to be rich in CBD, whilst others may contain ridiculous doses of THC. Once you begin to eat your edibles, it is advisable not to mix them with alcohol. Rather, eat a meal beforehand as this may help to keep you calm. Furthermore, practice caution when eating edibles and try to only consume them in low doses. In the case that you feel that you may have eaten too much, try not to panic, have a glass of water, and take a nap. You can also opt for a cold shower as this will help to calm you down.

Consumers, retailers, and even the FDA are not completely clear on every aspect of the plant. That said, it’s important that you always do your research before committing to anything cannabis-based, especially edible.